Creative Bioarray can successfully construct a stable cell line in a short period of time, in which the gene of interest (GOI) is silenced. The service has established a mature agreement through a number of gene silencing technologies and can provide stable and fast turnover transgenic cell lines according to your requirements.

The definition of gene silencing generally refers to the phenomenon that biological cells inhibit the expression of a certain gene through various gene epigenetic regulation mechanisms. It is generally believed that gene silencing is achieved through gene knockdown and gene knockout. When the gene is knocked down, the expression will be reduced, and when the gene is knocked out, it will be completely silenced (no expression) from the organism's genome. The methods currently used to silence genes include RNA interference (RNAi), CRISPR, or TALEN, which usually reduce gene expression by 70-100%.

CRISPR vs. RNAi vs. TALEN

RNAi, CRISPR, and TALEN can all interrogate gene function by blocking gene expression and analyzing its effect on phenotype. TALEN is similar to CRISPR in that it can cause gene knockout at the DNA level, while RNAi mainly silences genes by generating knockdown at the mRNA level. 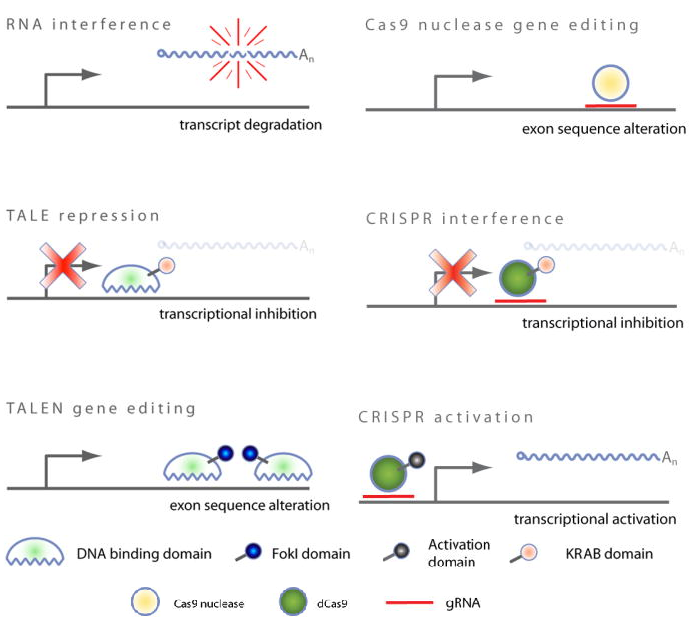 The principles of CRISPR and TALEN are similar. When a double-strand break occurs in the DNA in the coding region of a gene, it triggers one of two repair pathways to cause gene knockout. Non-homologous end joining (NHEJ) or homology-directed repair (HDR). Because NHEJ is an error-prone process, it usually results in the insertion or deletion of nucleotides (called InDel mutations). Since each cell undergoes different editing events, screening must be performed to isolate cell lines with frameshift mutations that cause significant changes in the translated protein. If a cell line has frameshift mutations in all alleles of a gene, the protein will be completely knocked out. This means that no functional protein is expressed in the cell. TALEN technology relies on the FokI enzyme to cut DNA double-stranded DNA, while CRISPR uses Cas9 to target DNA at the gRNA recognition site.

RNAi is an accurate and effective method of gene silencing, providing researchers with an easy tool to study biological systems by selectively silencing genes. This is a double-stranded RNA-dependent post-transcriptional gene silencing process, which mainly occurs in the mRNA processing body of the cell. Based on the highly specific and efficient silencing of target genes, it has become the most powerful and widely used gene strategy in genetic analysis and molecular therapy. The key to the effectiveness of RNAi in vitro and in vivo is whether it can be delivered to the desired organs and target cells in an effective way. The delivery system widely used in RNAi technology is a non-viral or viral vector delivery system, among which the main candidates as therapeutic tools are virus-based vectors, including retrovirus, adenovirus, adeno-associated virus (AAV)  and lentivirus when applied to cell-based silencing, lentiviral vectors are often used. Our gene knockdown stable cell line construction service uses RNAi technology.

The main difference between RNAi and CRISPR is that RNAi reduces gene expression at the mRNA level, while CRISPR and TALEN silence genes completely and permanently at the DNA level. Our gene silencing stable cell line construction service provides gene silencing technology services based on CRISPR technology and RNAi technology. This service can provide customers with the construction of stable transfected GOI silent cell lines based on selected cell lines or modified primary cells. The application of knockout and knockdown in research can be determined according to the experimental project. Both methods have advantages. For example, the reversible nature of knockdown allows the phenotypic effect to be verified by restoring protein expression in the same cell to normal.

Creative Bioarray provides technical services from vector construction to the formation of stable transfected GOI silent cell lines, helping our customers save time and effort. You will benefit from our technical expertise and state-of-the-art facilities and work with our scientific team to find the best solution to meet your needs.

If you are interested in our services or have any specific needs, please feel free to contact us. We look forward to working with you in the near future.

For research use only. Not for any other purpose.

As a pioneer of biotechnology, Creative Bioarray has developed into one of the largest independent biotechnology companies in the world. We are committed to providing our customers with innovative high-quality products and services through discovering, developing, and manufacturing.